How I Met Clive, the Winded Runner…

So I met this guy online and he told me that he was a runner. I like to run, have completed a few half marathons, 10ks and try to get out there at least 3 times a week. So when I found a guy that I had running in common with I decided to invite him for a run with our regular running group. As you could imagine I was a bit nervous about inviting him along as my friends we pretty judgey and would make it clear if they thought he was a dud. 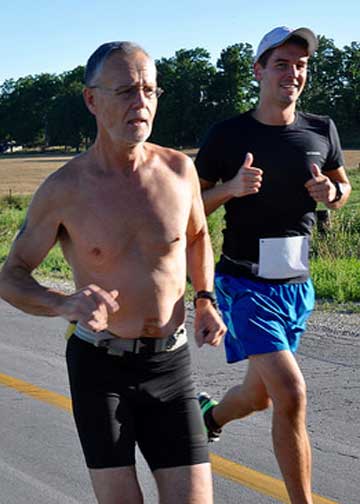 Well Thursday afternoon came around and I let him know when and where to met for our 10K run. We had been texting through the week and I was getting nervous and excited to actually meet him in the flesh. Oh by the way his name was Clive which well not the sexiest of names I couldn't fault him for a name his Momma gave him.

I waited for him with my friends for 10 mins and it was beginning to look like he was going to be a no-show when I spot an old guy with a cap and worn out old sneakers. Was this Clive? Sure enough he came bounding up and said " Hi. Sorry I'm late but you wouldn't believe what happened" He went on for a least 10 mins describing in detail how someone in traffic cut him off and then he forgot he needed gas and meanwhile my friends are giving me the serious eye rolls.

Finally we started out for our run. I looked for Clive and after five minutes he was far behind the group and really having difficulty. I ran back to him to see how he was doing. " Are you OK? You seem to be having trouble breathing" " Oh I'm fine. I guess I should have brought my puffer. I wasn't expecting it to be so humid. I think I will just sit for a minute or two" With that he just sat down in the middle of the street and tried to catch his breath.

By this time my friends were far ahead and I was left with Clive. I didn't know whether to call the ambulance or not but I knew he needed to get off the street. After five minutes he seemed to be breathing alot better and I helped him up and we walked to the curb. " Have you done much running lately? " I asked him. " Well I did run cross country in high school. I also walk pretty quickly to the mailbox and back every day. I am in great shape for my age"

"So how old are you Clive?"

" Oh no I didn't. You must have read my profile wrong. People are always mixing up what I say"

I have nothing against old guys but not that old. I walked Clive back to his car and made sure he was OK before I left. I had no interest in seeing him again. I did turn around and saw him take off his cap and there where 4 grey strands of hair trying hard to cover his bald head. Old and a comb-over! My friends would never let me live this down.