Heres A Doozy Of A Date…

I won't be upset if you don't believe this dating story. It's a doozy.

I met this really cute redhead on a dating site and things went really well chatting online so we decided to meet at a local restaurant. 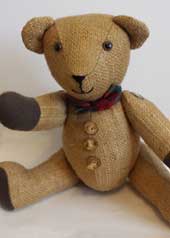 I got to the restaurant first and was seated at a table. Since I was a bit early I ordered a half liter of wine and I started sipping it while I waited. Soon enough the woman, her name was Susan, arrived and introduced herself. She was pretty and quite nicely dressed - except she was wearing one of those backpacks that you use to carry a baby. Inside the backpack was a creepy looking teddy bear peering out over her head.

She took off the backpack and pulled out the teddy bear and propped it up on the chair next to us and she introduced it to me. "This is Clarence. He's my mentor" she said. I was initially pretty amused with a little twinge of weirdness.

Once Susan was settled and we were all introduced, I offered her a glass of the wine that I had ordered. She initially said yes to the wine and I began to pour. A moment later she looked at Clarence with a stern look and said "Screw you, Clarence. It's a special occasion and I'm going to have some wine."

I was a bit stunned but I thought she was being funny, so I played along. I looked in Clarence's direction and said, "Would you like some wine, Clarence?" . Susan looked at Clarence again and a moment later got an exasperated look on her face and said "No, Clarence. I do not think he is trying to get us drunk to take advantage of us!". I laughed out loud thinking that she was still kidding around, when Susan glared at me. I guess she thought I was really trying to get her drunk when she said "I would have to be passing out drunk before I would sleep with you, buster".

I quickly changed the subject and within a few minutes I excused myself to go to the washroom. I paid the bill at the waiter's station and scooted out before she saw me.