She Was Quite Obsessed About Being Frugal…

I’m not sure if this is a crazy date or not, but the woman that I met certainly seemed a bit crazy.

I met her, I’ll call her Susan, on one of those free online dating sites and although she seemed quirky via email and on the telephone, she seemed really sweet. I generally go for the quiet, mousy type so it’s not such a surprise that she was quirky. I guess it’s a stereotype but the quiet girls are the nutty ones. Anyhow, after a few weeks of emails and calls we went out. 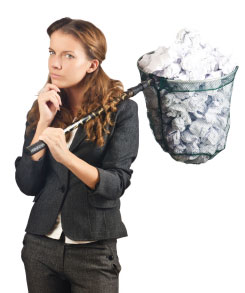 We met at a nice local restaurant and things went well. She appeared just as I expected from the photos on the dating website and from how she described herself on the phone. I’d say the only thing that was a bit curios was that her clothes were very wrinkled and her sweater was way too small for her. She had somewhat odd shoes too. And I literally mean odd, as in not matching. They were similar style but one was gray and the other was black.

So we ordered dinner and things went generally well. She told me about her job at the local university and her love of travel. But things started to make sense to me when she told me about how she was quite obsessed about being frugal. Susan told me that she was able to live on only a small fraction of her income due to her careful penny pinching. She described how she got all of her clothes by picking them out of the lost-and-found box at the university. She explained that her shoes were from a Japanese restaurant where she found them left at the front door.

As we neared the end of our meal things got stranger. When the waiter took away our plates she asked him if he would bag up the leftovers. That was fair enough; I might do that on occasion too. She even made a point to ask for the leftovers from my plate, a steak bone and a baked potato skin, to be packed as well. And then she asked the waiter if there was any leftover bread or perhaps some salad in the kitchen that they would be throwing out. The waiter smiled politely and said he would check with the kitchen staff.

Then Susan took some plastic bags out of her pockets – the kind that you put produce into at the grocery store. In one bag she put her used teabag. The second is where she dumped the complete contents of the sugar bowl. She smiled as she did it and said “waste not – want not”, and tied the baggie up. She folded her paper napkin into a perfect square and put it in her pocket and asked me if I would be taking mine. I said I was done with it and she folded my sticky napkin up and put it away with the other. She explained that by re-purposing napkins, she hadn’t had to purchase toilet tissue in more than 3 years. She told me how sometimes she goes to the mall where “everyone is so wasteful” and she collects slightly used napkins as well as salt and pepper packets from the abandoned trays.

When the waiter came back with a large shopping bag filled with kitchen scraps for Susan, I decided that she was too crazy for me. I walked her to the door and said goodbye. As I left she said she just wanted to run to the bathroom to see if they had any free tissues. As you can guess, I was gone before she finished her scavenging.