Sorry, Sweaty is Not Suave

My good friend Sarah took it upon herself to set me up with a guy she worked with. Apparently this guy, let's call him "Paul", was a great catch. He was single, had a great sense of humour and liked to cook. Sarah is incredibly persistent and rarely will take no for an answer. After a month of going on an on about Paul, I finally acquiesced and I told her that I would go out with him. 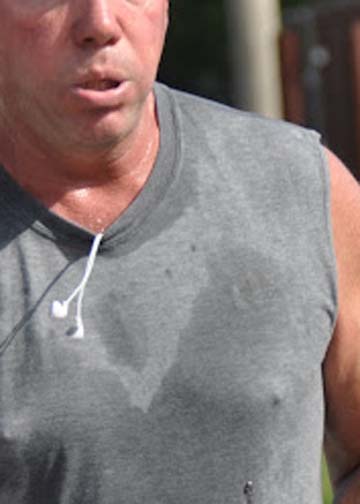 I should have known that this was going to be not a normal date, when Sarah said Paul didn't have a cell phone and would just meet me at the restaurant on the decided date.

OK I get it that some people don't have cell phones these days but unless you are my mother or the old guy who lives down the hall, it's pretty strange for a someone my age to not have one.

When I got to the restaurant, I saw that he was already there. He looked like his photo, which relieved me. We ordered drinks and chatted. Everything seemed to be going on quiet nicely. I relaxed a bit and started to actually enjoyed myself. We both seemed to have a lot in common and even knew some of the same people.

The main course arrived and that's when things started to get pretty outputting.

I had noticed that Paul seemed to be sweating but just brushed it off. Then I saw sweat start to dribble down his face and ended up in his pasta carbonara. He didn't even acknowledge this which struck me as odd. After about 5 minutes of watching multiple sweaty drips I began to get very uncomfortable and actually thought I might throw up. I found it very hard to eat my own food or even look across the table. I did look up right at the moment where he was using his serviette to dry his under arms!

This was the final straw. I had to get out of there immediately. I made up some sort of lame excuse and actually ran out of the restaurant. I texted Sarah and told her what had happened and added that I never want to be set up again.

Hopefully Paul finds someone who is cool with sweaty men and maybe they can be sweaty together.