Yoga: a fun way to get flexible and find love

Dating can be scary but we do it in the hopes of finding true love. We get set up on blind dates and fill out on line dating profiles to get out there and perhaps, find that special someone to spend the rest of our lives with.

My name is Nina and I have been on many dates with weirdos, freaks, geeks and slobs. I went on a date with a guy who had bits of cheese in his beard and another who had let his sister pluck his eyebrows. I lasted 30 mins with a dude who picked his nose right in front of me and flicked the remains on the floor. 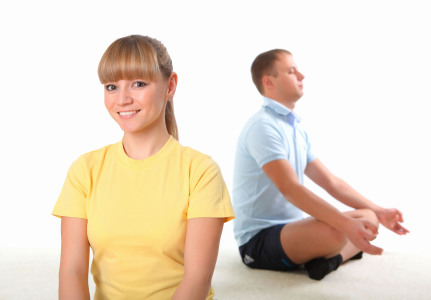 People tell me that I am not unfortunate looking and some even say that I am pretty but when it comes to finding Mr Right I have been pretty unlucky. I was beginning to think that I should just give up and get a cat. However that didn’t happen ( the giving up part) and I am proof that love is out there if you just look hard enough.

My friends and I had signed up for a beginner yoga class last November and we thought it might be fun and who knows we may meet some flexible guys. In reality, I knew that the class would be filled with women but thought it would be good to go try something new. On the first class, I did notice that there was one lumpy guy in the back and a room full of women of various shapes and ages. Most of the class I held back giggles as I tried to contort myself into unnatural poses and almost fell over at least half a dozen times.

The next week I decided to line up my yoga mat right at the back and hid behind the other more flexible members of the class. Mr. Lumpy smiled at me as he lined up his yoga mat next to mine and I smiled back. During the class I noticed him struggling with his downward dog just like me and we both smiled as we tried to not fall flat on our faces. At the end of the class, we said goodbye and I wondered if we had made a little connection.

At the third class I headed for the back and looked for my Mr. Lumpy and he was not there. I found myself a bit sad not to have someone as inflexible as me to share the class with. I had neglected to mention that my friends were all super-athletic and were always at the front of the class showing off in their lulu lemons. After the class we all headed to a coffee shop and I noticed my friend there in his yoga gear reading a book. I went over to ask him where he had been.

” Oh I was running late and by the time I got to the studio, class had started and I didn’t want anyone to notice me. I don’t know if you noticed, but I’m not very athletic and I would prefer to just hide in the back” he said with a smile.

” Well I am no great shakes either and I was hoping you would be there so I wouldn’t feel totally out of place”. I told him. He asked me to join him for a coffee and we sat and chatted for ages. My friends looked over and I smiled and waved. I was having a nice time with Mr. Lumpy.

Anyway that was a year ago and my boyfriend’s name is actually Will and we have been dating ever since then. We actually finished that yoga session and have faithfully attended yoga classes at least twice a week for the past year. He is no longer Mr. Lumpy and I can do the downward dog without falling over.

So Single Girls, sign up for yoga. You never know if your Mr. Lumpy is just waiting to fall in love with you.